I know so many smart IT Pro gone through this road and manage to create an automated way to this process. So, I am planning to be done this process automatically for all of the computers.

Absolutely my answers is PowerShell and I am manage to create a script line by like Here are the PS commands I am using:

But When I execute the command I am prompted for both credential passwords (as intended) but then the command errors out as:

I hope this link would help you.
https://www.petri.com/add-computer-to-domain-powershell

here is the complete guide :

Add Computers to a Domain with PowerShell

Learn how to join computers to an Active Directory domain using PowerShell in this easy Ask an Admin post.

Example picture below running on my domain ad.activedirectorypro.com

You will get prompted to enter your credentials. This will need to be a Domain Administrator account or a user that has been delegated rights to join computers to the domain. 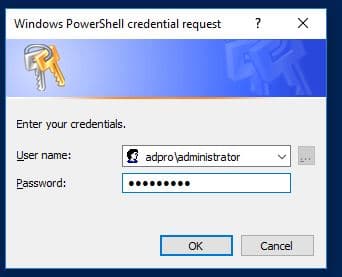 The computer should automatically restart and be joined to the domain.

Join Multiple Computers to the Domain From a Text File

To Join multiple computers to the domain you just need to create a text file and add the computer names to it.

In this example, I’ve created a text file called computers.txt and added PC2 and PC3 to it.

With the text file setup I’ll run the following commands:

Example picture below running on my domain ad.activedirectorypro.com

The first line sets up a variable ($computers), which stores the values of the text file. The 2nd line is similar to the previous examples, now I just added the -ComputerName and the $computers variable.

This command will go through every computer listed in the text file and join them to the domain.

Pretty cool right? This will defiantly speed up the process of joining multiple computers to the domain.

Join Computer to Domain and specify OU Path With PowerShell

When you join a computer to the domain it will by default go the computers folder. It is best practice to move the computers from the default folder to a different OU.

Thankfully we can automate this with PowerShell when we join the computers to the domain.

Run this command to join a computer to the domain and specify the OU path.

In the following example, I’ll be adding computers to the domain that go to the sales department. I have an OU setup called sales so I want the computers to automatically be moved to that OU.

The PowerShell command requires the distinguished name of the OU. The easiest way to get this is by navigating to the OU in Active Directory Users and Computers and opening the properties of the OU. Then click the Attribute Editor and copy the value of distinguishedName. 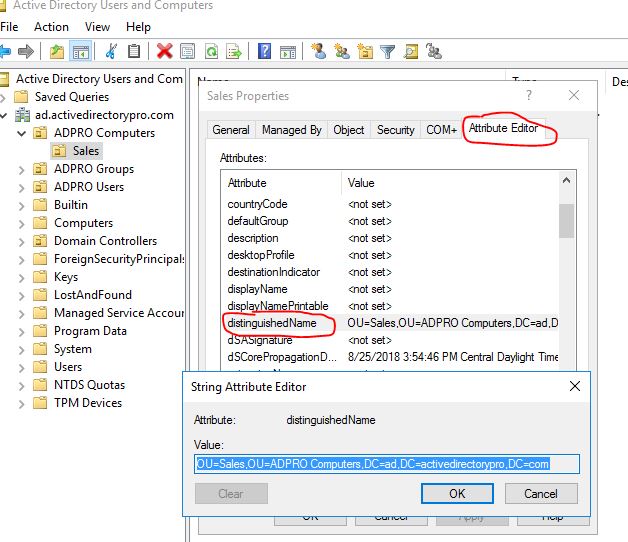 Now add this path to the command, below is the command for my domain. This will add the computer to the Sales OU in my Active Directory.

I’ve just walked through three examples of using PowerShell to join computers to the domain. Now you can forget about logging into each computer and manually adding them to the domain. With PowerShell you can quickly add single or multiple computers at a time.

Try out these commands and let me know how they work by leaving a comment below. 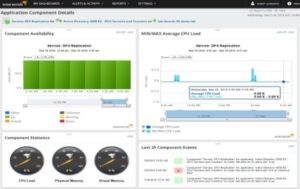 This utility was designed to Monitor Active Directory and other critical applications. It will quickly spot domain controller issues, prevent replication failures, track failed logon attempts and much more.

What I like best about SAM is it’s easy to use dashboard and alerting features. It also has the ability to monitor virtual machines and storage.